The Spring of 2015 saw LST’s former video studio being transformed into a beautiful acoustic performance space, suitable as a concert venue and teaching room. We were able to both enhance the acoustics and aesthetics of this high ceiling room by commissioning Music and Worship alumnus John Cook (2009-2012) to create a five-part artwork, with acoustic paneling behind.  The title of the piece – ‘Modulation’ – in this context captures the beautiful transition, from the old to the new for the Music Department at LST.

Here’s what John had to say about his work:

“The ideas for modulation began with a meditation on God’s transcendence, his ‘otherness’, in particular the creative impulse; an impulse which finds an outworking in our lives which is ‘other’ than (or maybe a modulated form of) God’s creative acts. Five grey columns painted in a notebook brought the thoughts to life. Columns of varying widths, based on a form of Pulse Width Modulation or varying frequency, as revealed by an oscilloscope.

“The musician creates and re-creates through the changes and the modulations, ever reaching for more, ever seeking a new voice, a new song. As Jeremy Begbie might say, ‘a superabundance’ of re-creating, re-interpreting, making all things new. In a society that seems no longer able to divine God’s glory in the created world, do the creative acts that issue from human hands and minds present a richer tapestry of his glory, as well as bringing him joy?” 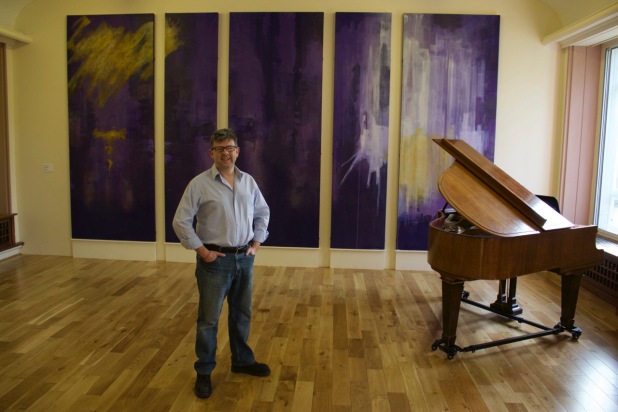 It is a delight to see the space enhanced by this abstract-expressionist piece, which integrates so well various key areas for the department – creativity, theology, technology and an engagement with the world around us.  We are very grateful to the Music and Worship Department donor who made it possible to commission this work.